Picasso and Einstein walk into a bar… 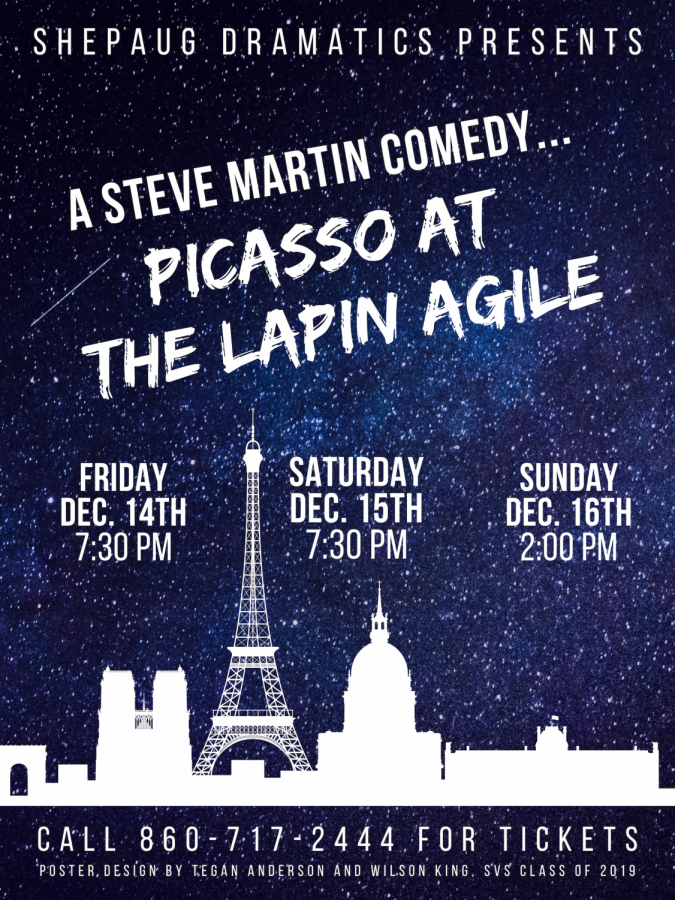 This weekend, Shepaug Dramatics will be presenting Picasso at the Lapin Agile, a comedy by Steve Martin. Come see this spectacular work, directed by Tim DiRosa, a Shepaug graduate.

There are three performances:

About Steve Martin
As an actor, comedian, author, playwright, screenwriter, producer, and musician—Steve Martin is one of the most diversified performers and acclaimed artists of his generation. Martin has been successful as a writer of and performer in some of the most popular movies of recent film history—appearing in more than 50 films over the course of his career. As an author, Martin’s work includes the novel An Object of Beauty, the play Picasso at the Lapin Agile, a collection of comic pieces, Pure Drivel, a bestselling novella, Shopgirl, and his memoir Born Standing Up. His latest play, Meteor Shower is currently on Broadway in a production starring Emmy Award-winner Amy Schumer, Keegan-Michael Key, Tony Award-winner Laura Benanti; and Jeremy Shamos and directed by four-time Tony Award-winner Jerry Zaks. Born in Waco, TX, in 1945, Steve Martin was raised in Southern California and began working as a comedian and magician at area amusement parks, including The Magic Shop at Disneyland. Martin went on to Santa Ana College and then earned his Theater Arts degree from UCLA. Source: Samuelfrench.com

About Picasso at the Lapin Agile

This long-running Off-Broadway absurdist comedy places Albert Einstein and Pablo Picasso in a Parisian cafe in 1904, just before the renowned scientist transformed physics with his theory of relativity and the celebrated painter set the art world afire with cubism. In his first comedy for the stage, the popular actor and screenwriter play fast and loose with fact, fame, and fortune as these two geniuses muse on the century’s achievements and prospects, as well as other fanciful topics, with infectious dizziness. Bystanders, including Picasso’s agent, the bartender and his mistress, Picasso’s date, an elderly philosopher, Charles Dabernow Schmendiman, and an idiot inventor introduce additional flourishes of humor. The final surprise patron to join the merriment at the Lapin Agile is a charismatic dark-haired singer time-warped in from a later era. This is the 2017 revised version of the script and is the only version that is approved for performance. Source: Samuelfrench.com