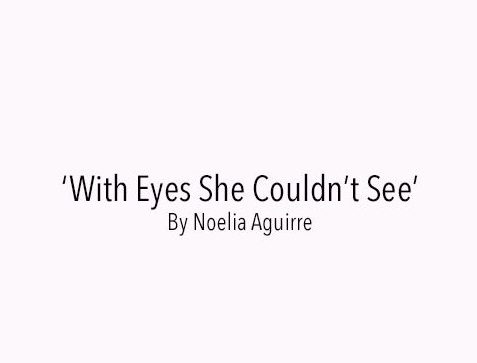 Our lives had become a white face on a blank page.

Every morning we’re expected to wake up and attend the same white school, with the same white walls, in the same white town we had all lived in our whole lives. Safe, right? There would be no diversity to scare the children, no difference to inspire change, and no choice to maintain same. No one questioned the system because no one ever wanted to. The sameness has become so ingrained in our minds that it’s a part of who we are and who we are to be. Everyone stopped caring about their own future because it had already been planned out. It paralleled the prescheduled present. But, every once and awhile, there would be talk of people getting out.

See, most kids chose to leave to go to college and make a living. Those were the ones that seemed to always return in their late 30’s with kids and enough money to buy the same house and send their kids to the same school, therefore, returning to the cycle of comfort. I never quite enjoyed the presence of these people. They always seemed to only talk about tangible ideas like the present or past. I haven’t decided if it’s because they just tend to be boring people due to their boring lives or if it’s because they truly believe we live in a tangible world. It’s like you have all the stars in the universe, but unless you chose to look for them, it’s possible to believe they’re not there. People tend to believe that we are meant to act during the day and rest at night. But what if it was reversed? What if we lived at night? Would we still believe in the sun? Either way, I find these people either don’t care about what the sky looks like or just care more about the money they make in a day.

Some kids in this town were forced to leave because either their family didn’t want them or they didn’t want their family. These were the kids that let wild pigs loose in the school as a group prank. No one ever seemed to really want them around so there’s never an emptiness when they leave. I know that sounds wrong but, when you think about it, it’s what everyone’s thinking isn’t it? It’s only wrong until everyone tells themselves it’s one less issue, one less different. After that, no one seemed to care about whether it was wrong or not, just that it happened. I guess you could say those kids left the sameness of this town, but they never really left since they didn’t chose to leave but were forced to. In choosing to leave there’s a purpose, a meaning behind it all. The choice to choose one’s future separates one’s life from the life they were given and forced to follow. These kids were thrown out into the world with no direction. The only thing they can hold to is where they came from. Their emotions become their crutch and eventually they can’t hold themselves up any longer and either return or disappear. Sad isn’t it? That’s what everyone thinks only when the town finds out what actually happened to these kids. There’s always a community funeral to honor the lives they never cared about before they were gone. How ironic.

But the stories I like to believe are the ones no one talks about. The stories that have never been told and remain unwritten. People have always found comfort in being oblivious to time. I think we all see it in ourselves. Everyone’s focus becomes getting through the hour, the day, the week, the month, and then the year. It’s like we constantly want time to move faster but then miss it once it’s gone. I want a story about time and how to use it. I feel like the only way we can live extraordinary lives is by figuring out how time works with its strengths and its weaknesses. That’s the impossible story that could change everything, if only it was written. But until I leave this same town and these same people, time will remain the same as it has been for years: an outline to our below average schedules revolving around simple means of survival.

Oh and before I forget, I’m Noah, and I’m late for school.

I’ve never been outside of Connecticut, but, then again, I’ve never been outside of the invisible walls that hold us in the prison that is Clayfield. Now although I love the classic New England weather, Clayfield doesn’t quite do it for me. The trees are never quite green enough and the sun never quite bright enough. Maybe it’s because I’m that stubborn teenage who can’t like what everyone else likes out of pride or stubbornness or maybe it’s because pollution is finally killing the ozone. Either way, it’s still missing something.

It’s missing a warmth in the air. I’m not talking about an overwhelming humidity but more of a warmth you find when you’re sitting outside on a spring day and you feel a short burst of breeze. It’s enough to awaken the tiny bumps that cover your arms, legs, and the back of your neck, but it’s never powerful enough to make you leave. There is something about that type of warmth that brings out an understanding, maybe not about how we work but why. For example, why you chose to sit outside by yourself and listen to the breeze instead of sitting inside and doing normal teenage things like being obnoxious and texting people who won’t respond and will never respond so that you can trick yourself into thinking you’re cool enough to receive a response.  It’s the type of warmth that makes everything else in the world seem so minute that you start to question why anything else ever existed. There’s something about that warmth that makes me feel so different, so out of place. I’m not being swallowed by Clayfield’s expectations and rules of living. It’s comfortable to know that there’s some part of me that’s still me, still Noah. Without that warmth, there is less and less Noah and more Clayfield. Maybe it’s not this town that’s missing something, but it is I that long for something so far undiscovered.

I’ve always wondered why, as a human race, we are always looking for something. Sometimes we’re looking for an answer to a scientific equation that will hopefully allow our hypothetical children to live longer lives than the generations before us, or, in my case, looking for purpose, a meaning behind it all. In school they teach us how to find the answers to simple equations in hopes that one day we can solve science’s greatest question on how to survive better and longer than anyone ever before. But, the one thing they forget to teach us is how to find purpose. The only thing they teach at Clayfield high school, home of the most average and vicious teenagers there are, is how to fill in the lines.

I remember when I first started the basic education system, the first thing my preschool teacher taught me was that different was wrong. It was the one day of that early spring that we had been allowed to color our completely identical coloring books outside. Since us preschoolers were not trusted to go where we pleased, we were forced to sit in a circle outside of the playground where the big kids would play at recess. We were allowed to chose one page from our coloring book and three different colors of our choice. I had already colored in most of the exciting ones with the super heroes and the dinosaurs, so I grudgingly picked a simple page that contained a single flower. All the boys had taken the blue shades and all the girls had taken the pink so I was left with the colors that no one else wanted. I chose burnt orange, bottle green, and canary yellow.

I had first started to color in the petals with the yellow shade because I had seen some in my mother’s old, dying garden yellow flowers that still popped up everywhere even though everything else seemed to give up. Then, I started to fill in the leaves with the green shade because grass had always been green, except in the winter but I couldn’t just leave it white. It was when I had begun to fill the rest of the page orange that my teacher came over to correct my mistake.

“Noah, I’m sure you can borrow a blue crayon from one of the boys.”

At the time I didn’t know if my teacher had chose to ignore me or simply couldn’t hear me, but teachers have always had quite an annoying sense of hearing.

“Noah, the class is outside today so that you could use the colors you see around you and use them in your coloring books,” she said with and that fake adult tone adults use when they want to seem superior.  I’ve always hated that, especially now that “adults” still use it on me when I just turned 17 last March.

Was I? Should I have been? What was wrong with orange? What was so right about blue?

It wasn’t until I was sitting in my first math class that I realized nothing in my life had changed from that moment in time. All we had ever been taught was to fill in their lines, their standards. In  elementary school, they taught us what these lines look like. In Middle school, they taught us why we wanted to fill them. In High school they made us fill them. No one seemed to mind the fact that we were slowly becoming an image someone above us believed we needed to be.

Maybe that’s why I constantly feel like there’s something missing and lost in the atmosphere. We’re always taught what we should do but never what we might do or can do. Maybe the warmth isn’t about what’s missing, maybe it’s about something that never was, a Noah that never was.