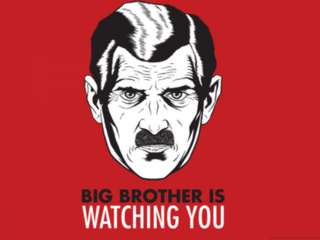 It’s London, 1984. War is constant and the Party controls everything– every action and every thought is closely monitored in order to keep society in order. The face of the Party’s leader, Big Brother, is pasted on every street corner, storefront, and billboard, constantly watching your every move. No matter where you go, you are always scrutinized as if you are a tiny bug under a microscope. There is no freedom of speech, expression or thought. Everyone is a complete replica of each other; there is no individualism. There is no such thing as love for anyone but Big Brother and there is only the utmost hatred towards the enemy of the Party and the leader of the underground movement, Emmanuel Goldstein. The Party is always right– if they say 2 + 2 = 5, then 2 + 2 = 5 and anyone who believes otherwise is immediately punished. This is the perfect dystopian world.

Fellow comrade and Party member, Winston Smith, is sick of living his life under constant scrutiny and struggles everyday to contain his disgust towards Big Brother. He spends his days in the Ministry of Truth where he rewrites the past so everything the Party predicts appears to come true, and the blind love for Big Brother continues to grow among the people. He yearns for a past where kids can laugh and play in the streets; where a man and a woman can freely embrace and not be arrested for it; where a man can voice his opinion and not be terminated. Luckily, Winston finds a rebellious woman named Julia who feels the same loathing towards the system and they end up secretly meeting several times. Whenever they were together, it was as if the world was how it was really supposed to be– the world that existed in the past. They lounged in bed all afternoon long drinking real coffee (rather than Victory gin) and discussing the future revolution against the Party that would end in their being together and living a normal life as lovers. Winston thinks to himself,

“whether in the abolished past it had been a normal experience to lie in bed like this… talking of what they chose, not feeling any compulsion to get up, simply lying there and listening to peaceful sounds outside. Surely there could never have been a time when that seemed ordinary” (119).

Unfortunately, Winston is betrayed by a working partner, O’Brien, who he mistakenly believes is an underground rebel and he is then turned into the Ministry of Love, where he ironically spends countless years being tortured as punishment for thoughtcrime. The main goal of the Ministry of Love is to force citizens to love Big Brother. The question is: Will Winston betray his pure conscious and learn to love the monster he grew to hate for so long?

1984 was a direct result of the Red Scare in the 1950’s and was written by George Orwell as an attempt to show the world what the immediate future would look like if we chose to live in a communist society. A truly thought-provoking book, and a scary one at that. The best books help us learn from the past, and give us insight on what to do better in the future. This novel is just that– it gives us a better understanding of what was happening in the 50’s, and it even gives us an idea of what our future could look like if we ever chose to overthrow democracy and establish a communist government. So, what does our future look like now?